I love post apocalyptic stories.  Nothing brings out the true nature of a character like being one of the last human beings alive in a hostile world.

The problem with post-apocalyptic fiction is that you normally have to wade through a bunch of near future sci-fi bullshit to get to those amazing characters and stories.  Zombies, plague, nuclear war–apocalypses are just so tacky.

Cormac McCarthy does a classy job in The Road by never addressing or even hinting at what calamity decimated humanity.  But Samuel Snoek-Brown does him one better. 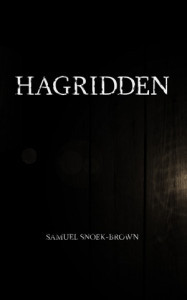 Hagridden by Samuel Snoek-Brown, published by Columbus Press, is an absolutely phenomenal book.

Snoek-Brown (which is pronounced like Book-Town, if you’re curious), discovered and utilized an actual apocalypse from our nation’s history.  Unlike most post-apocalyptic stories, the technology will never be outdated, and the typical suspension of disbelief, as far as the world is concerned, has been eradicated.  He even works in werewolves, yet we never leave the real world.  It’s truly brilliant.

Hagridden is set in the final days of the Civil War, and primarily follows the lives of two women struggling to survive in the Louisiana bayou.  All of the men have been conscripted to the Confederate army and left the swamp a year or more ago, the economy has collapsed, and what land remains in tact has been ravaged by hurricanes.  These two women are deposited into a hostile landscape, alone and with no preparation, and we see their human nature overcome their proprieties.  We question their decision to murder and steal, but while we can’t justify it, we can’t condemn it either.

This book defies genre.  I’ve spent cumulative hours in conversation with early readers trying to categorize this book without success.  Officially we’ve called it Historical Fiction, but it really fits into so many categories–from literary fiction to action/adventure to romance to war–it’s all there.  There’s something for everyone, and there’s enough of whatever you’re after to carry you through.

Best of all, this book doesn’t take itself too seriously.  While the subject matter is terribly dark, grave even, and the timescape and landscape are authentic and accurate, Snoek-Brown isn’t afraid to use his imagination.  You won’t find a dry history lesson disguised in a fictional story.  Instead you’ll find real characters, gritty and alive, doing sometimes bizarre, yet believable, things, realistically woven into a credible time and place.

I might have published this book, but don’t let that tarnish this review.  In fact, it’s the greatest credit that I can give it.  I’m not a rich man, and believe me, I have enough activities demanding my day, but I liked this book so much that I invested my very limited time and resources into it.

You might not love this book as much as I do.  And you will complain about the lack of quotation marks.  But I haven’t found a reader yet that didn’t think this was a solid book and a great read.

You can pick the book up from Amazon here in hardcover, paperback or for your Kindle.  It’s also available from Barnes & Noble here.  Alternately, if you can find a bookstore, just ask for it and they’ll get you a copy.

You can also learn more about the book at www.HagriddenBook.com.