Should Christian writers use profanity in their stories? 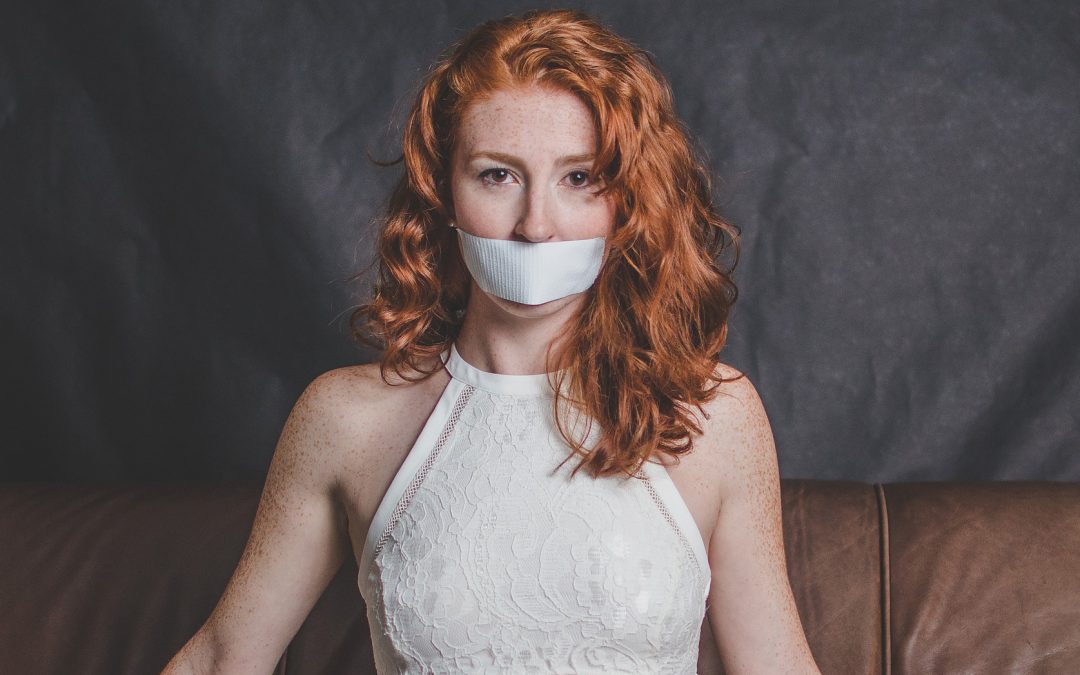 There are about six words that are ever-present in the real world, but taboo within Christian culture. How do we, as Christian writers, tell good stories about the real world without these six words?

Is it OK for Christian writers to include profanity in their writing?

The answer is fundamentally “yes,” it is morally OK for Christian writers to write realistic dialogue which includes profanity. But practically, the answer is sometimes “no.” It may not a good idea.

As a storyteller, profanity is helpful. It’s realistic and opens up a wider range of available emotion.

Gone With the Wind famously broke with film industry standards in 1939 with Clark Gable’s final line, “Frankly, my dear, I don’t give a damn.”  Truthfully, I can’t think of a profanity-less revision that’s quite as satisfactory.

But just because something is helpful doesn’t mean we should use it. Is “profanity” a language tool that’s appropriate for Christian writers to use?

On the topic of broken characters…

Many years ago we were publishing an anthology for Bellwether Publishing (then Columbus Creative Cooperative).  It was a secular anthology of short stories by writers of many different backgrounds. One of the stories that was selected to be included used the N-word in the text.

This sparked a lively debate among our editorial crew.  Our collective first reaction was “The N-word is never appropriate.”

Within the story, written by a white author, the n-word was used in dialog.  A deeply flawed white character used the term in a specifically derogatory manner.

As we considered this context, a new consensus emerged.  Characters need to be able to say what they say.

The author’s intention, I believe, was to show that words like this are used by people of low moral character. He didn’t set this up as something one should say, but rather he showed what it really looks like.  As storytellers, we can ignore ugly things and pretend they don’t exist or we can acknowledge them for what they are and show our readers the truth.  The subconscious result we can leave our readers with is I don’t want to be that.

Storytellers have always provided a mirror to society. Whether on a systems and policies level, or in relationship to individual behavior, storytellers say, this is what that really looks like and this is where it takes you.

Plain and simple, we’re not going to get very far by pretending the world isn’t what it is.  Christians aren’t called to live in a fairy tale land insulated from the world. We’re called to engage the world with our eyes wide open.

For an easy example, we can portray characters who smoke cigarettes as cool, suave, youthful, and vibrant, or we can portray cigarette smokers as unhealthy, crass, broken, and ugly.  We saw the first option employed by Big Media in partnership with Big Tobacco for decades and cigarette sales skyrocketed.  Do we counter that by creating characters that portray the gross, ugly, undesirable side of the story (the true side of the story)? Or do we ignore it, turn a blind eye, and pretend that cigarettes don’t exist, because the idea of smoking offends our sensibilities? Which is more likely to achieve the result we want?

The same is true of profanity.

Especially if you’re opposed to profanity on moral grounds, the best way to drive your point home may be to show exactly what type of people you think use profanity.

But the Bible says…

Before we go too far, we do need to address something that I’m sure will be contentious. I welcome comments and counter-arguments on this.

Our American Christian concept of profanity isn’t specifically supported by the Bible. The Bible doesn’t include a list of the seven words you can’t say on TV, nor is there a compelling argument to be made for the idea of “profanity” in the Bible.

Our idea of “profanity” is a construct of polite society, not of the Bible. Curse words are not always vulgar or obscene as some claim, in fact they can be used in endearing ways. Consider if I were to say “I f—ing love you, man.” In this case, I am using the F-word as an intensifier, to express my highest degree of love.

The guidelines regarding language choice that the Bible does provide always come down to intent.

“Let there be no filthiness or foolish talk nor crude joking, which are out of place, but instead let there be thanksgiving…Let no one deceive you with empty words, for because of these things the wrath of God comes upon the sons of disobedience.” Ephesians 5:4-6 (ESV)

While the NIV does include the word “obscenity” in this passage, I can find no argument by any scholar that the Greek words employed here have any relationship to our modern American concept of “curse words.” Rather, commentators and scholars seem to universally agree that this exhortation is about the quality of our subject matter. Talking about celebrity gossip violates the standard Paul establishes here more so than does using the f-word, b-word, a-word, or s-word.

Ephesians 5 instructs us to use our words to build up and edify the body of Christ. And it continues in verse 11, “Take no part in the unfruitful works of darkness, but instead expose them.” (emphasis mine)

As writers, we sometimes need to show the words and deeds of darkness if we are to expose them. How else can you expose something?

Even if we accept the NIV translation of “obscenity” at face value, what is obscene is a matter of intent. It’s unique to the speaker and the listener.  (For an obvious example, note how British and Americans swear differently. Same language, but depending on which side of the ocean you’re on, you’ll find a vastly different set of “obscene” words.)

However, most of our prohibition against profanity in modern American culture is based on a human social construct of decorum, not a relational respect. We must be equally aware that an over-indulgence of propriety or decorum can in itself be a sin, reflecting a self-righteous condition of the heart or a religious spirit that champions arbitrary right behavior over right consideration.

However, since obscenity is a relational offense, we cannot simply disregard our reader, either. A book or a story constitutes a relationship between writer and reader. If your reader believes that profanity is never appropriate, you may violate your love for a brother when you throw those words in front of his face.

You can’t influence someone who won’t listen…

Moral theory aside, on a practical impact level, if your reader will not read stories that include profanity, by violating his rules, arbitrary as they may be, you won’t ever have the opportunity to shape his heart. He’ll reject your story before he ever gets to the message.

In the words of Kurt Vonnegut in Hocus Pocus, “Profanity and obscenity entitle people who don’t want unpleasant information to close their ears and eyes to you.”

Audiences that are strongly opposed to “profanity” come to it naturally. They are well-intentioned and deserve our respect.

And surely we must examine our own intentions. If our heart is to use profanity because we can or to challenge small-minded thinking on the issue, we are likely not motivated by love.

I’ve been there. You can find examples of such work of mine at the bookstore.

For a time I believed that using profanity, to excess even, was my liberty in Christ and would open doors to speak to audiences that were typically uninterested in the church, audiences that found Christians prudish and legalistic. I thought that profanity was even a sort of cause to champion. While I still believe Christians could be a little less prudish and legalistic, I wouldn’t do it that way again. It’s not loving, and if that’s not a good enough argument, it’s not effective.

Gratuitous profanity will almost always shrink your audience, whether you’re a secular or a Christian writer. It will rarely, if ever, increase your number of readers or listeners.

If you stand on Christ, those that oppose him will continue to do so until the Holy Spirit changes their hearts. Throwing your sensitive-eared brothers and sisters under the bus won’t endear you to anyone. The secular world is not going to suddenly listen to you because you’ve proven you’re willing to hurt your brothers, all you’ll be left with is hurt brothers.

The profanity that Christian writers use should be limited to creating realistic dialogue, or in some cases, a first-person narrator.

While broken characters may need to use “bad words” in order to tell your story, there’s typically little benefit to reveling in profanity in narrative exposition beyond the dialog. The function of expletives is to surprise, to shock, to draw attention. Only in the right context and used with exceptional frugality do these words still serve that purpose.

The conclusion of the matter…

So we have a difficult balancing act.  Our duty is to be truthful. Our greatest impact as writers lies in authentically representing the world as we see it. Ephesians 5:11 instructs us to expose the works of darkness, the only way to do that is to show what darkness actually looks like. Pretending it’s not there is the opposite of exposing. But if we push our audience too hard, we may lose some of the eyes and ears we’re supposed to be influencing.

The answer is to love your audience. Always.

Christian writers: God is planting that story in you to help specific people, or even one specific person. Who is it? What’s their tolerance for reality? How far can you push the envelope before you lose them? What’s the middle ground that preserves your authenticity as the author and exposes darkness, but does not overchallenge your reader’s sense of decorum?

Truth is part of love, but truth is not synonymous with love.

The short answer: Let your broken characters be as broken as they can be, while still loving your brother.

Is it morally OK for Christians to use “profanity” in their writing? Yes.

Should broken characters speak like broken people in your dialogue? Probably.

Should Christians use profanity in narrative and exposition? Probably not.

While the Bible doesn’t specifically prohibit you from using the seven words you can’t say on TV, sometimes wisdom, prudence, and love may.

Have you decided that you just don’t want profanity in your work? This post will help you avoid profanity well without breaking your realism.

I help Christian authors reach the lost and build up the church.
Sign up for my newsletter for more good counsel. (It’s free, you info is secure, and you can unsubscribe at any time):